The authors will be awarding digital copies of all books on tour to a randomly drawn winner via rafflecopter during the tour. 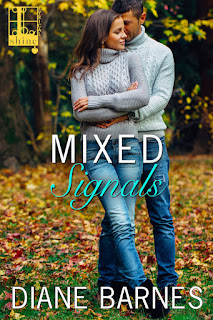 Getting dumped is never easy, but there’s a special bonus sting if your ex-fiancé is a producer for a popular morning radio show. Jillian Atwood’s breakup with Nico has become the hosts’ number-one topic. They’re even running a competition to find him a new girlfriend. The entire population of Boston, it seems, is tuning in with an opinion about who Nico should date next—and what Jillian should do to get over him.
Jillian’s co-worker, Ben, has his own ideas on that score. He hates seeing Jill depressed over a guy as unworthy as her ex. While he’s providing a friendly ear, he's also realizing how much more he’d like to offer. And if Jill could just get over the man who broke her heart, she might find the one who’s perfectly equipped to heal it...
EXCERPT
Ben starts to say something, but the waitress returns with our drinks, a beer for him and a glass of wine for me. As she places them in front of us, I notice a group of women at the bar checking him out.
“I think they’re into you,” I say, dipping my head in their direction.
He turns toward them. One of them waves.
He looks back at me. “She’s not bad,” he says. “Let’s find someone for you.” We both search the room. Even though we’re in a sports bar, there are definitely more women than men here, probably about four to one. “How about him?” he asks, pointing to a scraggly looking man with greasy blond hair and a long, unkempt beard. The guy’s shirt and pants are stained. “Filthy, just like you like them.”
“Oh yeah, the dirtier, the better.”
“I can get pretty dirty,” Ben says in a flirty tone.
“Mmm,” I say, sipping my drink. “You are downright nasty in your color-coordinated outfits.”
Ben looks around the room. “There isn’t anyone here who does it for you?”
A bunch of high school boys to our right are shooting spitballs at each other, two old men to our left are staring up at the television, and a really cute boy who looks about eight years old is having dinner with his mother in front of us. “Nope.”
He leans across the table toward me. “Not even me?”
I try to answer in a joking manner, but the look of fear that crossed my face may have already outed me. “Well, that goes without saying. Too bad you don’t plug it in at work.” I wink at him.
“I’d make an exception for you . . .”

AUTHOR Bio and Links:
Though she always dreamed about being the shortstop for the Boston Red Sox, Diane Barnes is a marketing writer in Massachusetts. She received her Bachelor of Arts degree in journalism from Saint Michael’s College in Vermont. She participates in two monthly writing groups and regularly attends novel writing workshops in Boston and Worcester, Massachusetts.
http://www.dianembarnes.com/
https://twitter.com/FenwayScribe
https://www.facebook.com/FenwayScribe
Buy links:
http://www.amazon.com/s/?field-keywords=9781616507909
http://itunes.apple.com/us/book/isbn9781616507909?uo=8
https://play.google.com/store/search?q=9781616507909&c=books
http://www.kobobooks.com/search/search.html?q=9781616507909
http://www.barnesandnoble.com/s/9781616507909

Lea Hart will be awarding a $20 Amazon or Barnes and Noble GC to a randomly drawn winner via rafflecopter during the tour.

BLURB:
Sara Montgomery is being targeted by one of the United States’ most feared organized crime groups. What options does she have when the Outfit decides they want to bring her in? Will the FBI provide enough protection or will she need more?
Grady Merrick is a partner in the Florida office of SAI and discovers the threat and knows he has no choice but to protect his neighbor. His sexy, beautiful neighbor. This is one assignment he’s going to enjoy.
Watch what happens when two people find themselves in the throes of a violent and destructive force. Will they survive the events or be caught in the whirlwind?
Excerpt
“Why didn’t you say something? You could’ve given me a heads-up,” he replied.
“I’ve spoken less than a dozen words to you over the last year. I wasn’t about to come over and have that be our first conversation. I figured you knew and didn’t care.”
Agnes shushed them from the other side of the couch. “You two be quiet. I can’t hear anything.”
“Turn up your hearing aid,” Sara called out.
Grady sat back and wondered when his life had started to go down the toilet. Being notorious was never something he thought would happen. And yet, here it was. The show finally caught his attention when all three ladies sighed and clapped their hands. “What just happened?”
“The one she’s interested in confessed he’s falling for her. They just kissed for the first time,” Sara responded.
“Don’t get too excited,” Gladys said. “She doesn’t end up with him. I checked out the website with all the spoilers, and she doesn’t choose him.”
“Don’t tell us any more. I want to be surprised,” Sara responded.
“You know this is a scripted show. None of this is real,” Grady whispered.
“That kiss he just gave her was about as real as things get. Trust me…I know.”
That was a fairly cryptic comment. He studied her for a moment and remembered what Dane had said about her having a lot on her plate. It was time to get to know his neighbor and see what she was all about. It seemed fair, since she’d been in the front row of the freak show that had been his life for the last several months. Plus, she smelled good. Grinning, he settled back and watched the show. If he’d been a betting man, he would have placed money on Sara not having an ounce of drama in her life. He moved his arm along the back of the couch and looked forward to spending time with the girl next door.
AUTHOR Bio and Links:
I live in Southern California and write stories about sassy, smart women and the alpha men who fall for them. When I'm not writing, I take care of my daughters and try to take long walks. I believe in the power of a big glass of wine, the right pair of shoes, and a big dose of sarcasm.
Keep in Touch:
Leahartauthor.com
Twitter
Facebook
Buy Links:
https://www.amazon.com/Whirlwind-SAI-Book-Lea-Hart-ebook/dp/B01JU7TVBC/
http://www.barnesandnoble.com/w/whirlwind-alison-hart/1100292267
http://www.rafflecopter.com/rafl/display/28e4345f1909/" rel="nofollow" data-raflid="28e4345f1909" data-theme="classic" data-template="" id="rcwidget_3xvbwcid">a Rafflecopter giveaway
Posted by Unknown at 11:16 5 comments: Links to this post

Sara R. Turnquist will be awarding a $50 Amazon or Barnes and Noble GC to a randomly drawn winner via rafflecopter during the tour.

Have you ever had an imaginary friend?
No so much a friend as an imaginary pet. I had a small dog named “Germ”. There was a child’s song I learned about a dog named “Germ”, so he became my invisible pet dog. It wasn’t a very strongly held illusion. I only remember “playing” with Germ once or twice.
Do you have any phobias?
Yes. I am arachnophobic and acrophobic (seriously, I can’t climb a step stool without getting light headed).
Do you listen to music when you're writing?
Yes. Mostly instrumental. I love the music of Star Wars, The Lord of the Rings, and the Dark Crystal. And I listened to a lot of Celtic Woman when writing my debut novel.
Do you ever read your stories out loud?
Yes, I think this is vital for every author. You catch more errors this way. And you discover more about the rhythm of your work. And I just love to read it out loud. Whenever I get done with a scene I have to read it to my husband for instant feedback.
Tell us about your main character and who inspired him/her.
Ismene is more introverted, naïve, younger woman. She is unsure in this new land in which she finds herself, and insecure about marrying this stranger in light of the fact that her heart belongs to a young man she left in Athens. Though she is timid, she is strong of spirit and has a fire in her. I learned about the Ptolemaic Period (the era in which Greeks ruled Egypt) in a history class in middle school and it became one of my favorite time periods. So it just made sense to me to set my first novel then (this was the first novel I wrote, but the second one published). I have seen a lot of movies and television shows. Several of Ismene’s qualities are taken from favorite characters. 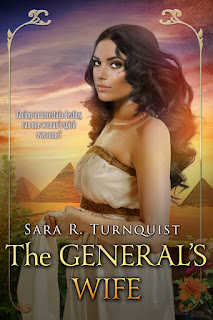 BLURB:
“Go home!” Ismene is speechless as she reads those words written in blood on the walls of her new home. The young, raven-haired Grecian beauty had traveled all the way from her homeland to marry the Pharaoh’s top general. But she never expected this. The hatred of the Alexandrian mob for their Greek rulers is right in front of her. It is the first of many threats she will receive.

Things are escalating out of control. Damaged crops and horses turned loose at night are one thing. But when Ismene receives a death threat, it becomes clear that there is a spy within her own household. She would turn to her husband to deal with this issue, except he left for battle by order of the Pharaoh. Not knowing whom to trust, she fears for her safety as well as the entire ruling class of Egypt.
Excerpt
Once they were alone, he gathered Ismene into his arms. “Love, are you truly all right?”
“I am.” She sighed, closing her eyes and just breathing in the scent of him. “Now.”
He kissed the top of her head and rubbed her back. When he closed his eyes he could still see the scene that he had come upon when he had found her on the balcony, and his blood ran hot. He forced his mind back to the present.
“I have a surprise for you.”
“Truly?”
“I thought I might read to you.”
“Oh?” She pulled back to look into his face. “That is a pleasant surprise. I think, sir, that you have found my weakness.”
“I think you know mine too, milady.” He said, drawing her in for an intimate kiss.
AUTHOR Bio and Links:
Sara is originally from middle TN. After a short stint in Memphis, where she earned a degree in Biology and began a career as both a Zoo Educator and a Sleep Technician, she then followed a dream to work for a large zoo in Orlando, FL as an Educator. Once she and her husband started their family, they moved back to Tennessee. Sara and her husband now enjoy a full life with their three beautiful and very active children. Sara enjoys many creative outlets – singing, piano, drawing, drama, and organizing anything. And even though she has enjoyed her career as a Zoo Educator, Sara's great love of the written word continued to draw her to write. She has always been an avid reader and, for many years, has been what she terms a “closet writer”. Her travels and love of history have served to inspire her to write Historical Fiction. Sara has made several trips overseas to the Czech Republic. Her time among the Czech people and the landscapes of the country inspired her and greatly influenced her work on her debut novel, The Lady Bornekova, set in Hradec Kralove, Czech Republic. Sara is also a member of the ACFW.
How to reach me:
Website/URL: saraturnquist.com
Twitter: @sarat1701
Facebook: Sara R. Turnquist, Author - www.facebook.com/authorsararturnquist
Pinterest: www.pinterest.com/saravturnquist/
Buy Links:
Amazon:
http://www.amazon.com/Generals-Wife-Sara-R-Turnquist-ebook/dp/B01A9FDT9E/ref=sr_1_1?ie=UTF8&qid=1453141274&sr=8-1&keywords=the+general%27s+wife
Barnes & Noble:
http://www.barnesandnoble.com/w/the-generals-wife-sara-r-turnquist/1123223438?ean=2940157880965
Kobo:
https://store.kobobooks.com/en-us/ebook/the-general-s-wife-1
Smashwords:
https://www.smashwords.com/books/view/606098
iTunes:
https://geo.itunes.apple.com/us/book/the-generals-wife/id1076223420
http://www.rafflecopter.com/rafl/display/28e4345f1913/" rel="nofollow" data-raflid="28e4345f1913" data-theme="classic" data-template="" id="rcwidget_6781an36">a Rafflecopter giveaway